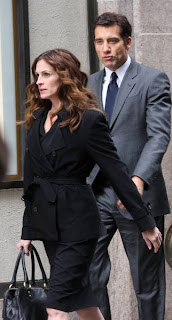 In "Duplicity," Julia Roberts and Clive Owen, red-hot lover-haters in 2005's "Closer," reunite as secret agents who quit their government jobs to run a $40 million con on rival cosmetic CEOs, marvelously played by Paul Giamatti and Tom Wilkinson. You'll have to see the movie to find out who really gets played. Written and directed by Tony Gilroy ("Michael Clayton"), it's heavily influenced by "Oceans Eleven Through Thirteen," determinedly cool and ironic, with a dizzying number of flashbacks. Keep the dates in your head or else. Even then, there's a glaring hole in the story. If you see "Duplicity," please tell me how Owen gets out of the jam in Duke's lab 15 minutes or so before the end.

The corporate espionage angle has such a broad satirical coloration (American businessmen? What boobs!) that the stars sometimes have trouble keeping hold of their love story. In one scene, Roberts shows up unexpectedly in Cleveland, where Owen has taken a job as security chief for a food company. When she tells him that it's time to come to New York to join the big con, he says he's about to make a key move in connection with his boss's new product: Double-crust frozen pineapple and ham pizza. "That's never been done before," Owen says as Roberts looks bored.

Us, too, almost. But their chemistry is strong enough that you''ll probably hang in there, despite the plot's intricacies. Me, I figured they'd get each other or the money, but not both. They'd first met six years before the action of the movie, when the U.S. assigned her to seduce Owen (a dashing British agent) and steal the secrets in his briefcase, which she accomplishes after drugging his champagne. Just before she scoots, she tucks a pillow under his head. They meet again in Rome two years later and hatch their plot. But he never completely trusts her, nor she, him. It's an occupational hazard, of course, though the idea is that even civilians keep secrets from one another. "Nobody trusts anybody," Owen says during their passionate reunion in Rome. "We just cop to it."
By Fr. John at 10:24 PM