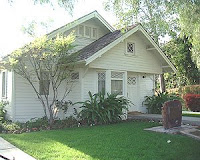 In advising President Obama to dispense with a Presidential library, Mark Feeney overlooks one teenie-weenie problem: Then who's going to pay for the warehouse to house his records? The George W. Bush Library, for instance, will have 145,000 square feet for his records and museum, which probably means 80,000-100,000 square feet just for the documents and artifacts. At Presidential libraries, these repositories are built with private funds. Feeney writes:

Quite simply, presidential libraries are undemocratic and unnecessary (the National Archives and Records Administration already has fine facilities, thank you very much).

That may well be, but it has no room for a new Presidential collection every four to eight years, either at its main facility on Pennsylvania Ave. or at Archives II in College Park, where NARA probably can't wait to get the massive Nixon Project on its way to Yorba Linda in 2010 so it can use the space for other purposes.

If the President's rich friends don't provide a building for Obama's records, I guess his successor can pass an archival stimulus bill. But once it's paid for, where do we put his 120,000-square-foot warehouse? Where do we put the 140,000-square-foot one after that? How about in facility in a community associated with the President in some way, built with private funds and envisioned as a museum and public programming center as well as an archives? Make sense? It does, hence the logic of the Presidential library system. (Here's an historical review by NARA's Nancy Kegan Smith.)

What could alter the paradigm is an administration, with the advice of NARA records experts, figuring out how to conduct a post-paper Presidency, which could dramatically decrease the number of shelf-feet needed for those rows and rows of grey Hollinger boxes (though the government would still need to find room for tens of thousands of gifts and other artifacts for each President). The main difficulty would be to figure how how to make sure we can always read the digital media that would contain our nation's precious history. Anybody got a 5.25-inch disc drive handy?