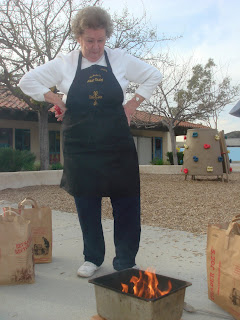 If you shrive me, you listen to my testimony or confession, and you reassure me of God's grace as expressed by his forgiveness and boundless love. If you begrudge me this kindness, if you refuse to be a minister to me, you give me short shrift.

And if you come out for a pancake supper on the evening before Ash Wednesday, you're participating in Shrove Tuesday (or if you're in New Orleans during Mardis Gras, Fat Tuesday). Anglicans and Episcopalians sometimes call it Pancake Tuesday. People used to cook up all the fatty foods and eggs in the larder, since they didn't eat them during Lent.

These days, while we're less concerned with denying ourselves during Lent, we definitely still go for the pancakes. At St. John's, the men's group makes plenty of the blueberry and chocolate chip variety, while Chef Gene Guazzo of the St. John's School kitchen cooks up a mess of succulent sausage and bacon. Before supper, Nancy Constable, on behalf of the Altar Guild, burned last year's Palm Sunday crosses for use during imposition of ashes at four services tomorrow. Remember that you 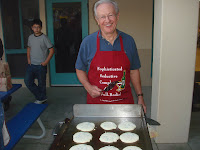 are dust, the minister intones, and to dust you shall return. Christians have been doing it since the 10th century, going out into the proud, death-denying world with a rough, cross-shaped smudge on their foreheads denoting repentance and proclaiming their mortality.

But that's tomorrow. Today Bob Hayden, Tom Woodruff (shown in his red apron), and others in the men's group set the tables, cooked, and cleaned up afterward. Choir members offered two rousing folk numbers, we said some ancient evening prayers, and the children marched into the church and hit the "Alleluia" (since our liturgies won't include that Resurrection word until the Great Vigil of Easter on Holy Saturday). As we conducted our joyful business, the southern California sky glowed like a Lenten purple banner behind the mountains that hug the neighborhood around our church. 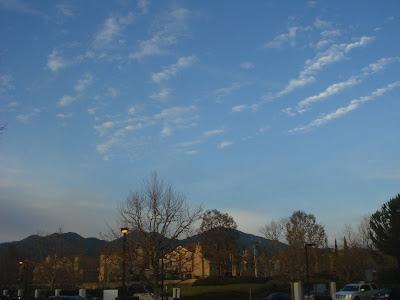