Prophet Of The Center 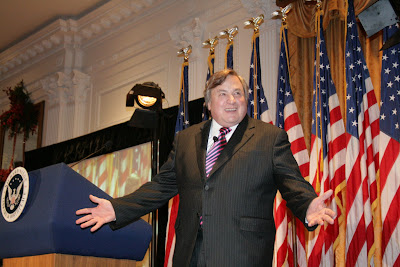 "I think Hillary Clinton could be a very good Secretary of State," political commentator Dick Morris told a crowd of 800 gathered in the White House East Room of the Nixon Library Monday evening. "In fact she'll be a great co-President." The strategist behind the march to the political center that resulted in Bill Clinton's 1996 reelection triumph, Morris (now a Republican) makes no secret of his disdain for the Clintons during frequent appearances on Fox News. Yet he described President-elect Obama's preference for hiring experienced Clinton-era figures -- and indeed hiring Clintons themselves -- as an expression of the young leader's insecurity. Since he's not entirely sure what he should do, Morris said, Obama "is appointing people to tell him what to do." His biggest laugh came when he said that a majority of Obama's Cabinet probably voted against him.

Morris doesn't share the prevailing optimism about Obama's moderate leanings. "It no longer matters whether he will govern from the center or the left, because the left has become the center," he said. He predicted that the various Bush-Obama stimulus schemes will fail and that the GOP will come roaring back in the 2010 midterm elections.

As for foreign policy, he said that Secretary of State Clinton will be tough and shrewd, understanding that permitting crises to develop would interfere with her ambition to achieve the Presidency. Her main job: Keeping more or less out of the news. "Foreign policy only matters when it goes wrong," he said. "When it goes right, no one pays any attention." He called on the audience to think about the Presidential candidate who had almost singlehandedly engineered and promoted a policy for turning the Iraq war from a winning into a losing proposition. That's right: John McCain.
By Fr. John at 10:43 PM