No Depression On Balboa Island, Yet 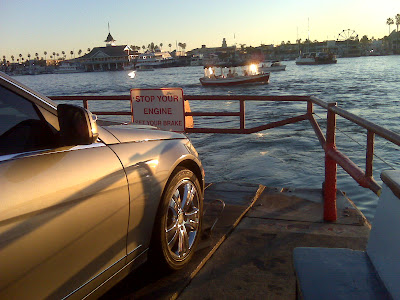 To get from the Balboa Peninsula (part of Newport Beach, California) to the tiny enclave of Balboa Island, you can take a three-minute ferry ride. People ride for $1. This Mercedes rode for $3. On Balboa Island, times don't seem so bad. The million-dollar homes facing the peninsula have the drapes open on their picture windows, to capture the warm afternoon sun and perhaps provoke curiosity. Nosiness would probably be a better word. In one dining room, a table was set for eight, with linen napkins and wine glasses. Kathy speculated they just had it that way for show. On the side streets, the summer cottages seem to outnumber the year-round residences. A few teenagers were around in their swimsuits.

Balboa always seems gracious and and mellow. And yet it's hard to imagine that the hard times aren't affecting 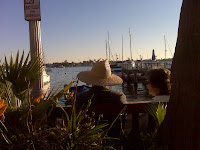 even these privileged folks (though unlike elsewhere in Orange County, there weren't many for-sale signs). Almost everyone I talk to has been hurt by the recession or knows someone who has been. I hear about a layoff almost every day. Kathy returned from a midday shopping trip with a description of a big strip mall we visit all the time in Brea, in north Orange County, where half the stores have closed. Circuit City, a suburban fixture for years, is unplugging for good. A friend told us about a five-star hotel that just opened in south county that on several recent nights had no guests.

When the going gets tough, the tough go shopping. As we left on our outing, I told our neighbor, Doug, that we were going out to stimulate the economy. Shouting back across the street, he said he'd heard the problem was that people were stimulating foreign instead of U.S. economies. So we agreed the solution was national self-stimulation. It's hard to be too worried on a beautiful Saturday afternoon, when people are walking their dogs, smiling at strangers, and watching the sun set on the smooth, green Pacific. As for the economy, we had dinner at the world-famous Tulsa Rib Co. and bought 17 boxes of mac and cheese at Trader Joe's for the church food drive. Take that, you doom and gloomers.
By Fr. John at 8:13 PM