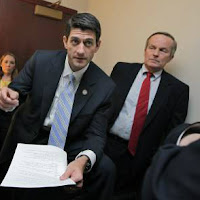 Mitt Romney, who owed the right absolutely nothing (as Richard Nixon would've told him two months ago in a ten-page memo), nonetheless pulled the big tent down around him when he let the tea party dictate a divisive VP pick. Rep. Paul Ryan's likeability temporarily kept casual observers and some pundits from appreciating that he's one of the most conservative figures in national politics. The dislikeability of his abortion and "forcible rape" policy partner is helping reveal the real Ryan, proving yet again that the gods of politics have a heart for justice and a sense of humor.

While I don't agree with Akin on much of anything, his authenticity is refreshing compared to a presidential candidate who abandoned the humane pragmatism of his gubernatorial years and a deficit-hawk running mate whose Bush-era votes helped add hundreds of billions to the national debt. If they lose in November, Republicans may one day identify Todd Akin as the unlikely prophet who helped them grasp what they had become.