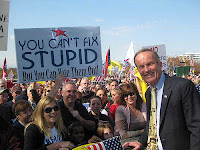 Rep. Todd Akin, GOP candidate for the U.S. Senate in Missouri, is in hot water with Republicans everywhere for saying that women's bodies have a secret plan for ending pregnancies that result from "legitimate" rapes (which he evidently distinguishes from falsely alleged or statutory rapes).

On the purely substantive level, it's hard to understand why they're so upset. He probably didn't come up with his weird theories by himself. It appears that he cribbed them from anti-abortion zealot Jack C. Willke, whose political support Mitt Romney has welcomed. From a practical policy perspective, Akin's position is indistinguishable from that of his party's platform writers and Romney's putative running mate, Paul Ryan. Along with 20% of the American people, Akin and Ryan and the Republican platform committee want to criminalize all abortion, including in the case of rape.

It's not the issue those now controlling the GOP want to talk about during elections. It's merely the policy they want to adopt while in office. They're mad at Akin for outing them. He should stay in the race and keep them honest.