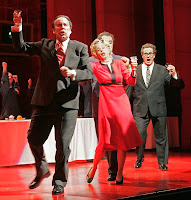 Cheng Shi-Zheng grew up in China during the Cultural Revolution, when elites were ruthlessly persecuted by Communist Party leader Mao Zedong. Cheng is directing a new Paris production of the opera "Nixon in China." If Nixon is controversial in the U.S., imagine Mao in China, where victims of the Cultural Revolution are highly influential in politics and culture. The Bangkok Post:

The stage is dominated by a statue of Mao "because he is very much a part today of Chinese life," Cheng said.

But "I don't think any Chinese composer would have written an opera in such a way about Mao ... this is a very sensitive issue. I am not sure this is something that the country is ready to talk about," said Cheng who was banned for five years from returning to his home country because of his work.