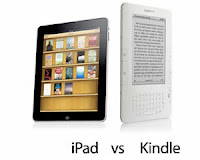 A couple of years ago, we learned that Steve Jobs' Apple had colluded with publishers to undercut Amazon's bid for galactic domination of the e-book market, which it was quickly gaining by charging $10 for bestsellers and most every other title. Apple hoped to get a quick and dirty piece of the action for the iPad and its own bookstore. Instead it got the attention of the Justice Department, which sued Apple and five big publishers for blatant price-fixing.

Rather than celebrating this victory for the consumer, David Streitfeld of the New York Times is worried about Amazon's clout:

[P]ublishers and booksellers argue that any victory for consumers will be short-lived, and that the ultimate effect of the antitrust suit will be to exchange a perceived monopoly for a real one. Amazon, already the dominant force in the industry, will hold all the cards.

“Amazon must be unbelievably happy today,” said Michael Norris, a book publishing analyst with Simba Information. “Had they been puppeteering this whole play, it could not have worked out better for them.”

If Amazon's 60% of all e-book sales can really be called a monopoly, Amazon earned it by brilliantly parlaying its dominance of mail-order books sales into a launching pad for the Kindle. If it was willing to take a loss on a $10 e-book sale (based on what it was paying publishers for resale rights) to encourage readers to buy Kindles, that was literally its own business. But the media appear to be buying the publishers' complaints that they couldn't make money on $10 e-books and that the price undercut the perceived value of text. The oil companies need to find reporters this credulous. We need higher prices to spur our exploration efforts! Only by paying more for gas will people appreciate the preciousness of this scarce resource!

Besides, I agree with Matthew Yglesias, who wonders how you don't make money on a $10 file download. If publishers can't, they need to streamline their business, which began to happen with recorded music after Apple figured out how to sell $10 downloads to people who'd been paying $18 for CDs. Apple used its wits to help the consumer get more affordable music and to spur restructuring of an arteriosclerotic industry. Apple then turned around and tried to stop Amazon from making text more affordable in precisely the same way. This week both companies got what they deserved.

Get daily ideas and instructions for making THOUSANDS OF DOLLARS per day FROM HOME totally FREE.
GET FREE INSTANT ACCESS