Higher Powers, In And Out Of The Newsroom 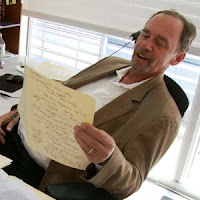 David Carr is media columnist for the New York Times and author of a harrowing drug addiction memoir, Night Of The Gun. On Dec. 28 NPR rebroadcast an October Carr interview by "Fresh Air"'s Terry Gross. Re-listening to a Carr interview is almost as good as a repeat of "Dexter." While his voice, injured by smoking, radiation treatments, and possibly exposure to toxins while he covered the aftermath of the Sept. 11 attacks, is a little rough, he speaks about my parents' beloved business in smooth, graceful cadences. Transcript here, podcast here.

Excerpt one, on the omniscient and indispensable elite editorial intelligence behind daily newspapers:

When I wake up in the morning and the gun goes off, I'm checking Twitter. I'm checking RSS feeds, and I get four newspapers at my house every day. I get the Wall Street Journal, the New York Post, the Star Ledger - because I live in New Jersey - and, of course, the New York Times.

And the reason I do is because the day before this, all this stuff has gone whizzing past me, and I seem to know a lot. But I don't really know what part of it is important. And I used to think it was so silly that newspapers would - like, I'd go to our page one meeting, and they'd be organizing the hierarchy of the six or seven most important stories in Western civilization. Meanwhile, the Web is above them, pivoting and eliding, and all these stories are morphing and changing. And I thought: Well, how silly is this?

But you know what? I came to want that resting place, where someone yelled "stop" and decided, "Look, this is stuff you need to know about going forward." Newspapers have become a kind of magazine experience for me, where they're - where it's a way to look back at what has happened.

And on his faith life and the great mystery of altruism:

I am a churchgoing Catholic, and I do that as a matter of - it's good to stand with my family. It's good that I didn't have to come up with my own creation myth for my children.

It's a wonderful group of people that I go to church with, and it's community. It's not really where I find God. And sort of what the accommodation I've reached is a very jerry-rigged one, which is: All along the way, in recovery, I've been helped - without getting into the names of specific groups - by all of these strangers, you know, who get in a room and do a form of group-talk therapy and live by certain rules in their life.

And one of the rules is that you help everyone who needs help. And I think to myself: Well, that seems remarkable. And not only is that not a general human impulse, but it's not an impulse of mine. And yet I found myself doing that over and over again.

So, am I underneath all things, just a really wonderful, giving person? Or is there a force greater than myself that is leading me to act in ways that are altruistic and not self-interested and lead to the greater good?

And so that's - that's sort of as far as I've gotten with a higher power thing, is I'm - you know, I'm kind of a pirate, kind of a thug. I mean, I've done a bunch of terrible things, and yet I'm able to, for the most part, be a decent person. How is that? Do I have some inner strength of character? I think not. I think something else is working on me.

But I find the spaces between people, whether I'm making a newspaper with them or in recovery or living with them as family or friends or - I find something really godly in that. I don't have trouble acknowledging that.