A top FBI official, Mark Felt gave law enforcement secrets to Bob Woodward of the Washington Post and helped destroy Richard Nixon's presidency. One authority, Ivan Greenberg, recently called it a coup, asserting that at least three others at the FBI were involved. Did Felt, who died in 2008, want to save his country from White House abuses or to get back at Nixon for passing him over for J. Edgar Hoover's job as FBI director? Historian and journalist Max Holland promises to answer the question in his new book, Leak, due in March. Thanks to Max posting on Facebook, here's an excerpt from the jacket copy:

Holland critiques all the theories of Felt’s motivation that have circulated over the years, including notions that Felt

had been genuinely upset by White House law-breaking or had tried to defend and insulate the FBI from the machinations of President Nixon and his Watergate henchmen. And, while acknowledging that Woodward finally disowned the “principled whistleblower” image of Felt in The Secret Man, Holland shows why that famed journalist’s latest explanation still falls short of the truth.

Holland showcases the many twists and turns to Felt’s story that are not widely known, revealing not a selfless official acting out of altruistic patriotism, but rather a career bureaucrat with his own very private agenda.

While Woodward kept the secret for a generation, Nixon and his aides always suspected it was Felt. In 2009 Holland promised to reveal the identity of the person who tipped off the White House. Presumably that nugget will be in Leak.

In an April 2008 post, I plotted the Felt connection between the Nixon and Obama eras:

If everyone knows that William Ayers and his comrades in the Weather Underground were planning to set bombs to murder innocent people, why didn’t they do time?

Because the investigation against them was muffed thanks to the illegal activities of the Washington Post‘s favorite Watergate answer man himself, Mark Felt — aka Deep Throat. 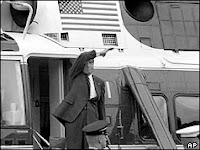 hen the black bag jobs became public, the federal government decided it couldn’t prosecute the alleged terrorists. Indicted during the Carter Administration, Felt and Miller were tried in 1980 in Washington. Ever the patriot, former President Nixon voluntarily testified on the defendants’ behalf, but they were convicted anyway and pardoned by President Reagan in March 1981.

Mr. Nixon’s gesture was especially gracious in view of his suspicions in th

e early 1970s that Felt had been the Post‘s famous source. When J. Edgar Hoover died, Felt had hoped to be named FBI director, but Mr. Nixon passed him over, whereupon the author of the FBI’s illegal campaign against the Weathermen developed a more finely-tuned sense of righteousness when it came to White House efforts to limit the FBI’s Watergate investigation. Behind the back of his rival and boss, acting director L. Patrick Gray, Felt used the press to undermine Mr. Nixon by dishing confidential information to Bob Woodward. He and the Post kept the secret of his identity and motives until 2005.

Now we know the truth. If it hadn’t been for Mark Felt, President Nixon might have finished his second term, and William Ayers might have gone to jail.