"Israel Is Not An Apartheid State" 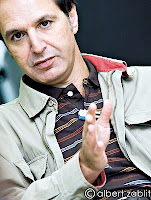 A welcome if somewhat discouraging dose of pragmatism about the Middle East and Israel from Abu Toameh, an Arab and an Israeli citizen who covers Palestinian issues for the Jerusalem Post. First, he addresses a favorite canard of some of the Palestinians' well-meaning friends in the West:

Israel is not an apartheid state. But there are problems and some discrimination with the Arab minority inside Israel. If Israel were an apartheid state, I, for example, would not be allowed to work for a Jewish newspaper or live in a Jewish neighborhood or own a home. The real apartheid is in Lebanon, where there is a law that bans Palestinians from working in over 50 professions. Can you imagine if the Knesset passed a law banning Arabs from working even in one profession? The real apartheid is also in many Arab and Muslim nations, like Kuwait, where my Palestinian uncle, who has been living there for 35 years is banned from buying a house. The law of Israel does not distinguish between a Jew and an Arab.

More disturbingly, he says Palestinian President Mahmoud Abbas is so weak that only Israel's presence in the West Bank keeps him in power. What if Palestinians got their wish -- a state based on the pre-Six Day War borders?:

Abbas will collapse and Hamas will take over the West Bank in less than a day. If I were Israel, I would not give Abbas one inch of land in the West Bank – not for ideological reasons, but to avoid a situation where Hamas and others would take over the area.

Father John:
You mentioned that you wrote constantly, and looking at your blog...that is almost true. Though much of what you write about is kind of over my head it is fun to have a glimpse at was is your canvas. Oh, and now I know there is a lake in Yorba Linda!

Thanks, Caroline -- it's great to have a reader! East Lake isn't much of a lake, but it's pretty at Christmas. New Year's blessings.