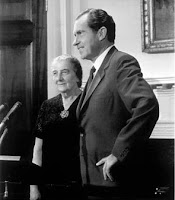 Jason Maoz on a Watergate-weakened President's iron determination after Egypt and Syria attacked Israel on Yom Kippur in 1973:

What is clear, from the preponderance of information provided by those directly involved in the unfolding events, is that President Richard Nixon — overriding inter-administration objections and bureaucratic inertia — implemented a breathtaking transfer of arms, code-named Operation Nickel Grass, that over a four-week period involved hundreds of jumbo U.S. military aircraft delivering more than 22,000 tons of armaments.

As for [Golda] Meir herself, to the end of her life she referred to Nixon as "my president" and told a group of Jewish leaders in shortly after the war: “For generations to come, all will be told of the miracle of the immense planes from the bringing in the materiel that meant life to our people.”