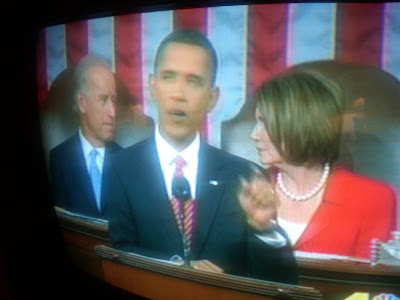 The President's health care speech pleases congressional centrists. Meanwhile, on the left and right, the VP and Speaker's head movement language spoke volumes after Rep. Joe Wilson (R-S.C.) called the President a liar during his speech, which he shouldn't have done, number one, because it was offensive, embarrassing, and demeaning to the dignity of the United States and, number two, because it will be used as an excuse when a Democratic legislator screams at a Republican President (or holds up a sign, wears a rude t-shirt, whatever). In this day and age, civility is all too easily forfeited to the imperative of big egos and mouths. As for Biden and Pelosi, they looked at each other (whaaa?), then joined Obama in glaring in Wilson's direction, then got out what looked like a seating chart like the principal and dean of students at a high school assembly. Perhaps a disadvantageous office reassignment is in Wilson's future.
By Fr. John at 11:12 PM

Working from home today, taking a lunch break and having some free time at the moment, of course I looked in on your blog.

Insta polls suggest that Independents and centrists among viewers liked the President’s speech and increased their support for him after hearing it. One Democratic group (Carville Greenberg’s Democracy Corps) focused during the speech on swing voters, including Independents and partisan “weak leaners.”

It reported that heckling the President “generated a strong backlash among focus group participants.” I'm very interested in how voters view issues of tone as well as substance. I remember looking at similar polls last year during the period before the election. What Democracy Corps reports after yesterday's speech seems to fit with similar reactions by such groups in insta polls during last year’s Presidential campaign debates. Post debate polls last year suggested that many swing voters didn’t like sharp displays of strong partisanship.

Not only did support for the President go up after the speech, he reportedly saw an uptick in see him as “on your side” numbers.

So, who are these Independents and swing voters? What motivates them? It doesn’t appear to be polarization. A commentator on CNN’s site wrote at the end of August that for Obama’s “independent supporters, the hope and change that Obama represented was a break from the hyper-polarized politics of the past.”

CNN reported in August that

“Independents hold the balance of power in American politics. Their ranks have rocketed during the Obama presidency as the two parties have become more polarized, hitting an unprecedented 41 percent of the electorate in July, according to a Washington Post/ABC News poll. At the same time, identification with both Democrats and Republicans has declined.

All this is evidence that Obama's election did not represent a liberal ideological mandate . . . More than 70 percent of independents now disapprove of Congress.

But it also shows that rejection of the Republican brand has only accelerated since the conservative caricatures . . . and the town hall protesters -- became the most prominent public faces of their party.

Independents are nonideological problem-solvers. They are sick of Washington's harsh and cynical hyper-partisanship, but they do not have a split-the-difference approach to politics.

To put it another way, they are fiscally conservative but socially progressive with a strong libertarian streak. And it's on fiscal issues that independents are putting Obama on notice.”

If that is an accurate assessment, it may provide some context for the largely positive insta-poll results to the speech among such voters.