Back To School Of Rock 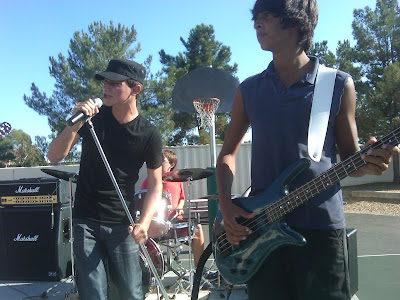 The Epidemic hit south Orange County this afternoon -- the #1 as opposed to the H1Ni variety. The band with the excruciatingly timely name is a confident four-piece featuring lead singer Brian Maietta and bassist Mossimo Perricone (St. John's '09).

Appearing exclusively in Rancho Santa Margarita at the St. John's Episcopal School Family Festival, the Epidemic, with their tight set spanning 40 years of rock and roll, demonstrated that St. John's students such as Mossimo (whose parents, Sam and Uma, were watching proudly today) definitely master the fundamentals. They skillfully played the Otis Redding/Black Crowes/Grateful Dead chestnut "Hard To Handle," the Beatles' "Come Together" (in honor of the 09/09/09 release of their remastered greats), and even the Who's "My Generation."

After the set, before he was overwhelmed by well-wishers, I asked Mossimo how he learned John Entwistle's swift, powerful runs. "On-line," he said.

He's been playing bass a year. Hey, kid: Don't forget who taught you religion in fifth grade.
By Fr. John at 4:43 PM