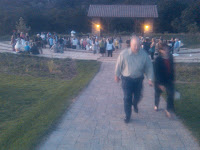 Ed Gotschall grew up in Shadyside, Ohio, where his father worked as a miner for 38 years. One of the founders of New Century Financial Corp., Ed (who attended St. John's Church with his wife, Susan) was watching his beloved Ohio State Buckeyes on a rerun of the Fiesta Bowl when he died suddenly in January. Before his death, he'd been working on plans for the Irvine Ranch Outdoor Education Center in Orange, California, where a magnificent 220-acre Boy Scout camping and discovery facility opened earlier this year. 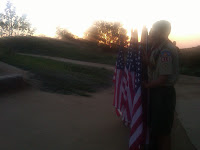 Today Susan and two of her children, Brittany and Matthew, presided in the rolling hills of Irvine Park as the Shadyside Interfaith Chapel was dedicated in Ed's memory. About 100 friends of the Gotschalls and the Boy Scouts had gathered at sunset on a cool evening to watch. The Scouts provided the honor guard, and after the ceremony, Susan provided s'mores. Susan told me that Ed's 85-year-old mother still lives in Shadyside and is as proud as can be.
By Fr. John at 9:52 PM