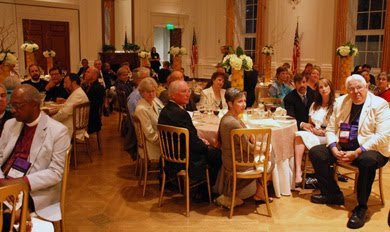 During the General Convention of the Episcopal Church in Anaheim in July, Bishop J. Jon and Mary Bruno (shown at left) chose the Nixon Library's East Room for their gala dinner in honor of Anglican Communion primates from around the world. In briefly welcoming them and the Brunos' other guests, I took the opportunity to enunciate the Episconixonian Creed. I just caught up with dinner coverage provided by my colleague and fellow Michigander, Pulitzer Prize winner the Rev. Pat McCaughan. Thanks, Pat!:

The Rev. Canon John Taylor, vicar of St. John Chrysostom Church in Rancho Santa Margarita and former director of the Nixon library, said the facility, which opened in 1990, was a wonderful setting for the gathering because like Anglicans, Nixon, the 37th U.S. President, was "a centrist. He was betwixt and between … what Nixon called enlightened realism or pragmatic idealism" is possibly a way forward for the church as well, with our polarized politics."

Taylor noted that Nixon was between two poles in American politics. "He was not welcomed by the far right of the Republican Party" because of his opening to China, improving relations with the Soviet Union and establishment of the Environmental Protection Agency, as well as relatively enlightened views on civil rights in the 1950s and forward, Taylor said.

Nor was he welcome "on the left in American politics because of the Vietnam War and his especially aggressive anti-communism early in his career."