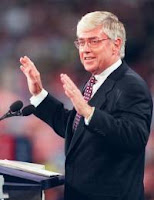 A contributing editor for "Rolling Stone," rolling through life having inherited his family's distrust of almost all things Republican, describes his flirtations with heresy:

At the time, Richard Nixon defined the concept of the big, bad Republican to me, being evil and all. This was my first mistake -- my family's very rightful rage about Watergate masking any understanding of Nixon's fascinating complexities and intelligence. Ronald Reagan was the opposite in a way -- the man's charmingly genial personality and communication skills hiding in some ways for me the darker side of his political point of view....

Jack Kemp was always considered another "Good Republican" in my house - and of course it didn't hurt his standing with me that he had been a pretty fine quarterback first. We certainly didn't agree with him on every subject, but Kemp struck me then and now as a very decent man who in his own tax-loathing way truly cared even about people who were never going to vote for him, and for whom being a "Compassionate Conservative" was not just some empty campaign promise and horrible historic punch line.

President Nixon and Jack Kemp struck up a hearty friendship in the 1980s, regularly meeting and corresponding. Though no supply-sider, RN admired Kemp's energy and certitude. His football bona fides didn't hurt, either.

When he came to speak at the Nixon Library several years ago, Kemp couldn't sit still long enough to be introduced or, after his speech, to be given his thank-you gift (an Elvis-Nixon mug). It probably shouldn't have been surprising to Bob Dole that in 1996 Kemp turned out to be one of the most undisciplined Vice Presidential candidates in modern history. His irrepressible, voluble nature and our hyper-poll-sensitive modern politics weren't a good match, nor did some of his open-minded social views fit the modern Republican Party.

Once I had the honor of taking him on a tour of the Library. Within five minutes, he (who, after all, know the material far better than I) was conducting the tour himself, telling his fellow museumgoers that while RN had accomplished much to be proud of, he had committed one egregious, unforgivable error: Taking the U.S. off the gold standard. Eternally youthful, principled and gracious, with a heart for freedom and justice, Jack Kemp was a political and policy supernova. Our civic life is poorer without him.
By Fr. John at 12:40 PM