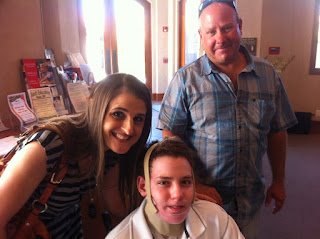 In early August, Ben Zauri, 15, was badly burned as the result of teenaged hijinks of which no more need be said. You can follow his story here. After weeks in isolation and a series of painful surgeries, he was released from the hospital a week ago. He came to church on Sunday with his mother, Missy, and father, Sean. He's in a wheelchair as the burns on his legs continue to heal. All in all, brave Ben (younger brother of Chris, active in the St. John's youth ministry) is doing magnificently, through the grace of God, the love of his family, his own resources of strength, faith, and hope, and the good people at the Grossman Burn Center at Western Medical Center in Santa Ana.

With that, The Episconixonian -- with books to read, songs to learn, and weddings to conduct (especially my elder daughter's on Oct. 6) and to ensure that during the next nine weeks an obsession with politics doesn't crowd out attention to ministry -- begins a campaign-season hiatus.

I'll conclude by saying I was surprised that the Republicans risked reprising Ronald Reagan's 1980 question -- "Are you better off today than you were four years ago?" -- and also that the Democrats took a couple of news cycles to figure out how to answer it. I unhesitatingly answered yes, since four years ago, I was considering signing up for firearms training in preparation for the apparently imminent meltdown of the global financial system and the return of a hunter-gatherer-barter-based economy. But I'm a worrier.

For now, it's good enough for me that Ben is better off than he was four weeks ago. God is good!