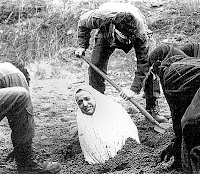 Islamists in control of a town in northern Mali stoned a couple to death after accusing them of having children outside of marriage, a local official who was one of several hundred witnesses to the killings said Monday.

The official said the bearded Islamists, armed with Kalashnikov rifles, brought the couple into the center of the town of Aguelhok from about 12 miles away in the countryside. The young man and woman were forced into holes about four feet deep, with their heads protruding, and then stoned to death at about 5 a.m. Sunday, the official said.

“They put them into the holes, and then they started throwing big rocks, until they were dead,” the official said, speaking by satellite phone from the remote desert town near the Algerian border.

“It was horrible,” he said, noting that the woman had moaned and cried out and that her partner had yelled something indistinct during the attack. “It was inhuman. They killed them like they were animals.”