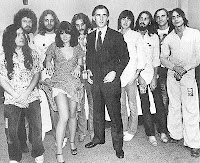 Rebecca Schoenkopf, who wrote the "Commie Girl" column at OC Weekly until 2007, has taken over from Ken Layne as editor, publisher, and owner of the sassy Washington, D.C. blog Wonkette. On Feb. 27 St. John's men's group speaker-turned-law student Frank Mickadeit devoted his Orange County Register column to Schoenkopf and hinted that the deal was in the works:

She's had spotty writing and editing employment over the last three years. She went back for a master's degree, though, and she's negotiating to acquire a very well-branded national blog, which, if she pulls it off, everyone will remark, Oh, this was what she was meant to do! To which I will say: No, this is what she's always done, better than anybody.

Maybe, but while the blog's subtitled "the D.C. gossip," Schoenkopf's first two posts were based on stories that appeared in the LA Times (about Gov. Jerry Brown, pictured here with rock stars, when he was cooler) and LA Weekly. She'd better move to Washington quick! To celebrate one of the nation's reddest county's new toehold in one of its bluest cities (and in the probably misguided hope that the new editor will discontinue her blog's tradition of sometimes putting swear words in headlines), I'm finally adding Wonkette to my blog roll.
By Fr. John at 4:14 PM