Did you see NBC's "The Office" on Thursday? Pam and Jim's baby was baptized in a fictional church in Scranton, Pennsylvania that bore a remarkable resemblance to one of southern California's prettiest, Church of the Angels in Pasadena, whose longtime rector is my clergy buddy the Rev. Canon Robert J. Gaestel. 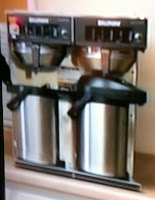 . By now Bob's blase about the Hollywood stuff. In fact I don't think he'd be ashamed if I revealed that, when I asked him excitedly whether he'd met Steve Carell during the taping a couple of months ago, he replied, "Who's Steve Carell?" Whereas I'm still buzzed just about seeing one of my favorite hangs on TV. Bob and a half-dozen of us meet every other month in the COA parish hall, in a sitting room located through the doorway that you can see over actor John Krasinski's right shoulder. I'm also pretty sure I spotted the

Carell's character, the irredeemably off-key Michael Scott, jokes in a bad Italian accent about being the baby's godfather (which, in fact, he isn't) and impulsively jumps on a bus with the cheerful members of the church's youth group as they prepare to depart on a three-month service trip in South America. How refreshing that "The Office" didn't make fun of the church folk, who were as well-adjusted and sincere as members of the ensemble cast (employees and executives of a paper company) were misanthropic. Imagine that: A TV comedy that makes you want to go to church. In case you do, here's the real thing. 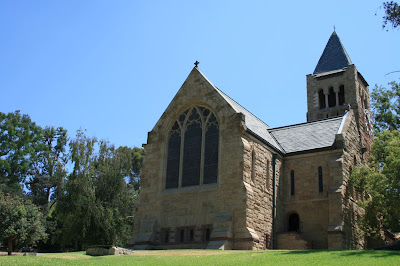 I'm glad you write about broadcast tv some times. Because I haven't watched a broadcast series since Seinfeld and Friends went off the air. So I get a glimpse at some of them through your writing. The medical shows don't appeal to me (my sister's terminal illness put me off doctor shows). And although I read mysteries and detective/police "procedurals" some times, I haven't watched a law enforcement show in ages. (Remember the old FBI series, where Efrem Zimbalist, Jr. drove around DC? I always said, "where the heck is he supposed to be going, the sequencing makes NO sense?"

When I hear people talk about House or Grey's Anatomy or any of the CSI shows or reality tv, I'm worse than RN talking about All in the Family because the names of the characters mean nothing to me! (RN: "He's the hard hat. . . Arch is the guy’s name.") I've always been a little quirky about tv; in school, when my (female) friends gushed about Peyton Place, I was watching Combat! and Twelve O' Clock High (a Quinn Martin production. Remember their prologue, acts, and epilogue structure?) Already the budding historian fascinated by the past, even at what was I back then, 12, 13, 14?

On cable, I did watch The Sopranos (my boyfriend and I both enjoyued that). And I love Mad Men. But regular broadcast tv? In the little bit of spare time I have on weeknights, I curl up with a book. When I'm not in front of the computer, that is, LOL.

I like reading your posts about presidents but it's good to see the culture and religious stuff too. And its great to see you reading Dickens. (Did you watch the wonderful production of Little Dorrit on PBS in 2009? I loved the depiction of the Circumlocution Office, all those archival papers spread around!) The political can get depressing.

I thought the U.S. just went through a unique, singular bad phase in RN's day; I never thought I would see anything so dispiriting again in my lifetime. Maybe in some way, given the prominent voice these days of the older voters, we're still relitigating the Vietnam period through surrogates, sigh. Sad, actually. I guess I got too complacent during the Ford, Carter, Reagan, Bush I, and Clinton years. Because I'm a live and let live moderate and not a culture warrior, I lost sight of how the culture war issues were buried when GWB was president, only to combine with economic anxiety in a very strong brew after 2008.