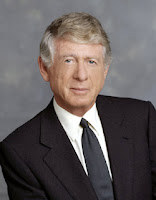 Hat tip to my Facebook buddy David Schwartz for this Washington Post op-ed by Ted Koppel, who bemoans the rise of TV niche journalism (much of which, isn't). David learned about it from our fellow former Andover journalist Gary Lee. Two excerpts:

Beginning, perhaps, from the reasonable perspective that absolute objectivity is unattainable, Fox News and MSNBC no longer even attempt it. They show us the world not as it is, but as partisans (and loyal viewers) at either end of the political spectrum would like it to be. This is to journalism what Bernie Madoff was to investment: He told his customers what they wanted to hear, and by the time they learned the truth, their money was gone.

The transition of news from a public service to a profitable commodity is irreversible. Legions of new media present a vista of unrelenting competition. Advertisers crave young viewers, and these young viewers are deemed to be uninterested in hard news, especially hard news from abroad. This is felicitous, since covering overseas news is very expensive. On the other hand, the appetite for strongly held, if unsubstantiated, opinion is demonstrably high. And such talk, as they say, is cheap.

As Koppel makes clear, because they make relatively little (if any) money, news divisions have always had a tenuous hold on the loyalty of network executives. So it probably should've been predictable that network news would be further eroded when someone figured out how to make money offering news (or "news") on cable.

There's an imperfect analogy with our dying newspapers, whose display and classified ad revenues have been sapped by the Internet, which in turn still offers most newspapers' hard-won and well-reported content for free. That can't be sustained much longer. How much does it cost the New York Times to keep a bureau in Beijing? A million dollars a year? More? And they'll pay for that with my free page views of the coverage? Not for long. After that, for fact-based insights about what the word's newest superpower is up to, we'll be relying on the Hackosphere, whose own overhead has been dramatically reduced thanks to free wireless at Starbucks.

Koppel argues that the market is now in control of the news business. If that's the case, I'd bet that three-quarters of the American people still want, and may even be willing to pay for, solid, unbiased, well-reported journalism. So there's some hope. On the other hand, we also want pragmatic politicians.