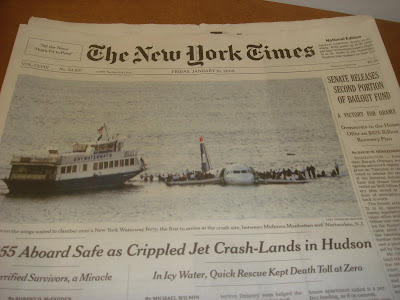 Since I got my Kindle for Kristmas in 2007, the Nixon Foundation's copy of the New York Times has languished in my office until, after the decent interval I have decreed in the event I should for some reason choose to bestow my favor, a colleague takes it to be enjoyed by those who still read newspapers on newsprint. After all, the entire editorial content downloads to my Kindle every morning, for about $14 a month. On a handy device the size of a trade paperback, I can read it (or any one of 25 books, blogs, magazines, or other newspapers I've downloaded) before getting up or while having breakfast. Since Kindle news consumers pay for content, the device and ones like it seem to me to hold the key to the revitalization of the newspaper business.

Or so I believed until this morning. For whatever reason, I didn't read the paper before coming to work. As usual, the printed Times awaited on a credenza. It asked nothing of me. It has grown used to my neglect. But this morning, across five columns (shrunken columns, since the paper got narrower a couple of years ago), was a color photo of the US Airways Airbus A320 floating in the Hudson River. The Kindle edition would've had the photo, but small and black and white. I've seen plenty of on-line photos of yesterday's miraculous event, and it was all over the cable and broadcast news last night.
But five columns in the paper! That means something right off the bat, because usually a photo above the fold in the Times is three or maybe four columns. They invite a glance. For an experienced newspaper reader, five columns demands special attention and even wonder.
And yet the emergency landing wasn't the lead article, according to the Times's lights. That privileged spot was reserved for a one-column headline on the far right that read, "Senate Releases Second Portion Of Bailout Fund; A Victory For Obama; Democrats in the House Offer an $825 Billion Recovery Plan."
And yes, I can see their point. The miraculous saving of 155 lives is a big story, and so it got five-column art plus a five-column hed over a news story and human-interest sidebar, all above the fold. Last night on TV, the plane was almost all we heard about. But while CNN and Fox News were hyperventilating, editors at the Times wanted to make sure that readers realized it may even be more important that our representatives, on the same day, took a giant step closer to spending $1.175 trillion in taxpayers' money within weeks or even days after Jan. 20. That's what newspapers do -- they reach beyond the urgent to the important. They whisper in our ears what we need to know while other media shout what we want to hear.
Below the fold there was another dramatic photo from the Hudson, showing three women in their orange and yellow life vests in a raft floating near the stricken aircraft. The remaining articles are on Gaza (where the three-week war has resulted in 1,000 deaths), AG designate Eric Holder's confirmation hearings, and Japan's so-called outcasts, the buraku. That's not a subject people will usually go looking for with their browsers and BlackBerries, not something that will make the "CBS Evening News" or the "O'Reilly Factor," but deserving of our attention nonetheless, and available only because highly paid editorial professionals have done their work covering a world that they know better than most of us do.
Across the bottom of the page, a 12.5" ad for a new cable TV series. I really haven't been paying attention. For decades the Times has run classified ads on the bottom of p. 1, but I don't remember seeing a color display ad. All power to them if it helps them stay afloat. Thumbing through the sections, I came to Weekend Arts, with a breathtaking photo above the fold of the White House (brilliantly lit thanks to Pat Nixon, who raised the money to install the lights) and looming against a royal purple sky. It's a 16-page section on Washington during Inaugural week, with information about restaurants, historic sites, art galleries, and logistics. Reading on my Kindle, I might've skipped the section entirely. The paper version is someone you want to slip into your briefcase to look at later.

But what actually seduced me this morning was the paper's odor. Do you remember the acrid and yet sweet smell of ink on newsprint? I grew up with it. My parents and godfather were newspaper people, and on Saturdays my mother would take me to her office at the Detroit Free Press or the Arizona Republic. While she worked, I'd play with the thick black copy pencils, Underwood manual typewriters, and smelly three-ply NCR paper (my mother called them "books") reporters used to write their stories. When she had something to send down to the composing room, she'd let me roll it up and put it in the pneumatic tube.

The composing room itself, with the now long-gone Linotype machines clattering madly, was an explosion of sound and sparks. The smell of ink and paper was everywhere, and it came off my spurned newspaper this morning like pheromones. Not even a Kindle, with its lightning fast Internet access and revolutionary text pricing, can make a newspaper kid that happy.

I imagine people my age are equally nostalgic about the memory of thumbing through our Zeppelin and Stones albums even as we thumb our iPods and let the records rot in the garage. But while digital music sounds just as good as vinyl, no new medium has as yet replaced the experience of absorbing, in one evocative and intelligently-ordered and -designed package, the creative work of editors and reporters. And since that work is essential to a well-informed public and thus to freedom and democracy, we should think twice before spurning newspapers unless and until something better (if not necessarily their olfactory equivalent) comes along.
By Fr. John at 9:45 AM