RN's Buried In Yorba Linda, FL In The Part 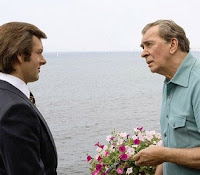 When actor Frank Langella visited Yorba Linda two years ago while preparing to portray RN on stage, he talked as much about his working-class, Garden State roots as his days of fashionable Nixon-hating on Long Island. As every interview he does comes over my e-transom (with journalists paraded through a suite at the Ritz Carlton in New York, just like with Julia Roberts at the Savoy in "Notting Hill"), it feels more and more as if whenever he's talking about Mr. Nixon, he's also talking about himself. And now this, from an interview by Stephen Schaefer:

“When you talk to really successful people they were the runts of the litter, the middle kid or the funniest one. I was one of those kids, a four-eyed kid who was very shy and backward. I had to fight. Whenever I wanted to go out with a girl she wanted to go out with the football captain, not a skinny kid who wanted to be an actor. The characters I often play are fighting.”