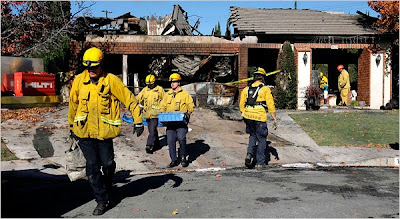 To talk his way into his mother- and father-in-law's Covina, California home on Christmas Eve, Bruce Jeffrey Pardo wore a Santa suit. We'll probably never know if he was also being ironic, whether he hoped to magnify his experience by delighting children and others at the party just before terrifying and murdering them. He killed nine people in all.

Whatever Pardo's intentions, irony had its way, as it so often does. As the world knows, Pardo had planned to escape to Canada after the assault, but because he'd been burned by the fire he set, he took his own life instead. Police said his Santa suit was fused to his body.

The photograph above of the home of James and Alicia Ortega, who died along with their daughter Sylvia (Pardo's estranged wife), was taken by the AP's Nick Ut, whose photo of a little girl who had been burned by napalm became emblematic of the Vietnam war.

Give rest, O Christ, to your servants with your saints, where sorrow and pain are no more, neither sighing, but life everlasting.
By Fr. John at 4:37 PM